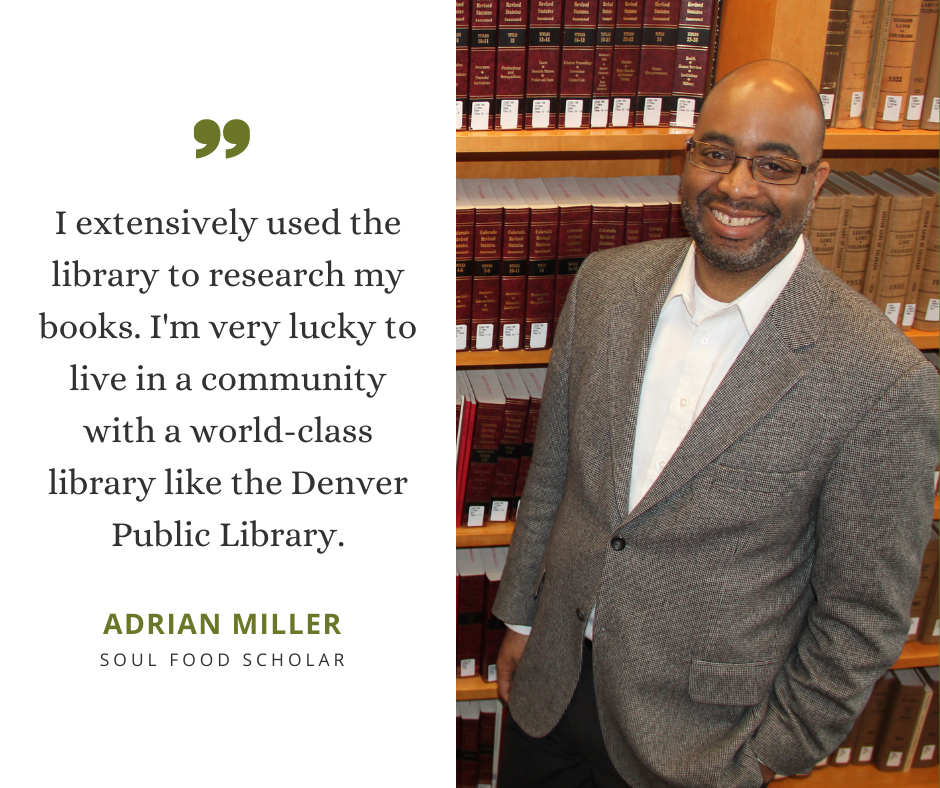 Adrian Miller is a food writer, James Beard Award winner, attorney, and certified barbecue judge who lives in Denver and uses the Denver Public Library to research his books. A "hardcore" reader as a child, "I read the entire World Book encyclopedia set that my parents had and the Bible in its entirety", Adrian now shares food stories that unite people and share knowledge.

Miller’s first book, Soul Food: The Surprising Story of an American Cuisine, One Plate at a Time won the James Beard Foundation Award for Scholarship and Reference in 2014. His second book, The President’s Kitchen Cabinet: The Story of the African Americans Who Have Fed Our First Families, From the Washingtons to the Obamas was published on President’s Day 2017. It was a finalist for a 2018 NAACP Image Award for “Outstanding Literary Work – Non-Fiction,” and the 2018 Colorado Book Award for History. Adrian’s third book, Black Smoke: African Americans and the United States of Barbecue, was published April 27, 2021.

What's the last great book you read?
Rodney Scott's World of BBQ by Rodney Scott and Lolis Eric Elie. It's the first cookbook by an African American barbecue professional in . . . thirty years! It highlights the pivotal role that African Americans play in barbecue culture and the neglect these same cooks have received from mainstream media.

What are you currently reading?
Caste: The Origins of Our Discontents by Isabel Wilkerson. It's a very good explanation of why African Americans are in a subordinate position in the U.S., how it happened, and that it is not by accident.

What do you plan to read next?
Just Mercy by Bryan Stevenson. I got it as a gift some time ago, and I need to check it out!

Who is your favorite author?
I don't have an overall favorite, but Calvin Trillin came to mind when I read this question. I love the way that he uses humor in his food writing.

Which author would you most like to meet?
Unfortunately, many of the authors that I'd love to meet have passed on. I'll say Malcolm Gladwell. I like the way his mind works, and it would be fun to have a wide-ranging conversation with him.

How have you used the Denver Public Library?
I'm a big fan of the reference librarians and the interlibrary loan program.

What do you think is the most important role of public libraries in our current times?
I see the role as two-fold: providing resources and access to information for those on society's margins, and invigorating a community's literary scene.