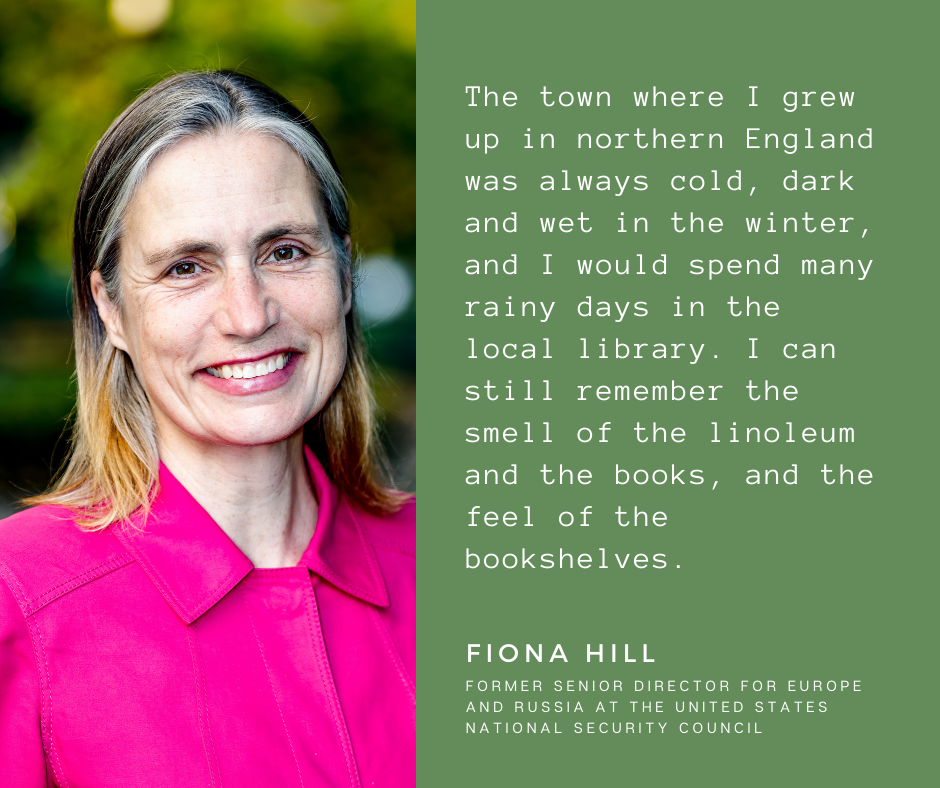 On a recent visit to Denver, Dr. Fiona Hill, one of the foremost experts on Russian President Vladimir Putin, spoke to audiences at World Denver, the World Affairs Council, Metropolitan State University of Denver, and University of Denver about the crisis in Ukraine and her recent book, There is Nothing for You Here: Finding Opportunity in the 21st Century. Dr. Hill is currently senior fellow at the Brookings Institution’s Center on the United States and Europe Foriegn Policy program.

Dr. Hill’s counsel has been in high demand recently as governments, scholars, the media, and ordinary citizens try to understand Putin’s motivations and ultimate intent for Ukraine. She served under three administrations – Presidents Bush, Obama, and Trump. Under President Trump, she served on the National Security Council as deputy assistant to the president and senior director for European and Russian affairs.

Dr. Hill’s powerful testimony at the first impeachment hearings of President Trump sparked great interest in her background. In her book, she writes about her upbringing in northern England and her experiences in the White House, and provides prescriptions about how to provide opportunities for all Americans to help us avoid future division and disaster.

Pam Jewett, former chair of the Friends Foundation Board of Directors and a longtime friend of Dr. Hill, spoke with her about two of her favorite things: books and libraries.

What's the last great book you read?
Lessons from the Edge: A Memoir, by former Ambassador to Ukraine Maria Yavanovitch. The machinations surrounding Yavanovitch’s removal from her position as ambassador to Ukraine led to the first impeachment hearings of President Trump. It’s a really great book by one of the most distinguished women in foreign service who rose to the level of ambassador, and it would be particularly appealing to students interested in pursuing careers in foreign service or anyone interested in diplomacy and the kinds of work public servants do.

What are you currently reading?
I'm reading a book that is a bit of a diversion for me, Project Hail Mary by Andy Weir.  He wrote The Martian, and similarly, this book is about someone who finds himself alone and in extreme circumstances.  It’s about how people facing difficulty must dig deep to find solutions.

What do you plan to read next?
Origin, a Genetic History of the Americas by Jennifer Raff. I am really looking forward to reading this. Raff is a scholar who has done quite a lot of research about how the first peoples came to the Americas and the migration patterns that led to their settlement. It is getting great reviews.

Who is your favorite author?
I have so many, but I really like to read Erik Larson, who writes books based on first-hand sources of historical fact but using his own narrative. My favorite of his is In the Garden of Beasts. It is about Germany in the early 1930s on the eve of World War II when it is just becoming apparent that Nazi Germany is taking a nasty turn. He uses the diaries of the U.S. ambassador in Berlin and his daughter as his sources. He is a remarkable storyteller.

What did you read as a child?
I spent a lot of time reading J.R.R. Tolkien The Hobbit and The Lord of the Rings series, CS Lewis’s Chronicles of Narnia, and also Lewis Carroll’s Alice in Wonderland and Through the Looking Glass.  To be honest, I think the Carroll books prepared me well for everything I have done in life.

Tolkien's and Lewis’ works came right out of the horrors of World War I, and their stories are derived from and shaped by it.  Lewis’ Chronicles of Narnia also were about children who were evacuated as refugees from the blitz in London and find themselves in a magical land where another great war is taking place at the back of a wardrobe.  They are beautifully written and very evocative books, and along with Alice in Wonderland, are some of the greatest literature designed for children and frankly adults in the English language.  And they are still remarkably relevant.

How have you benefitted from libraries?
Libraries were my refuge as a kid.  Growing up in a poor household where we didn't have a lot of money or space for books, they opened up an amazing world of information, knowledge and experiences.  The town where I grew up in northern England was always cold, dark, and wet in the winter, and I would spend many rainy days in the local library.  It was my own personal repository of books and knowledge.  As a student and academic, I have lived in libraries to do my work.  I now have too many books in my own library, and I'm always trying to figure out where to put them.  Or I'm donating them to public libraries.

You talk about libraries in your recent book, "There is Nothing for you Here: Finding Opportunity in the 21st Century," as part of your larger message about creating opportunities.  What do you think is the most important role of public libraries in our current times?
I think one of the most important roles for the library today is serving as a resource for the larger public. Libraries don’t just provide books, but also access to information in so many ways.  They provide a means of accessing the internet for those who don’t have it at home or a place to receive advice on all sorts of topics, from taxes to job searching and resume writing, to starting a business or hearing an author speak.  They are an excellent place to connect with networks and larger communities.  Go out and support your library!  They play a vital role in our communities and in society at large.